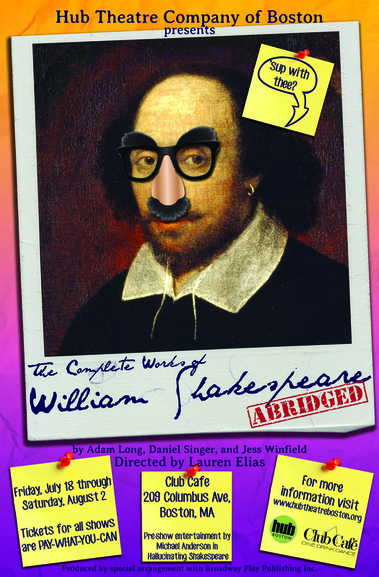 (Boston) The working hypothesis for The Complete Works of William Shakespeare (Abridged) appears to be this: when at his most serious, the Bard is the most unintentionally hilarious. It’s darkly comic, in a way, that a pair of lovers would die passionately together despite knowing each other for a few days. And there’s something ridiculous about a prince putting off the assassination of the uncle who stole his crown because he doesn’t believe the ghost of his father. In Hub Theatre Company’s take on the parody, Patrick Curran, Adam Lauver (alternating with Will Moore), and Brooks Reeves seek to both compress and skewer Shakespeare’s body of work. END_OF_DOCUMENT_TOKEN_TO_BE_REPLACED

Presented by Theatre@First
By Tom Stoppard
Directed by Elizabeth Hunter

(Somerville) So, weird thing about Rosencrantz and Guildenstern are Dead, it makes Beckett slightly more palatable and Shakespeare slightly less.

Stoppard’s play riffing on Beckett’s infamous Waiting for Godot is, on the surface, a glance at what’s going on behind the wings during the course of the greatest play ever written in the English language. If we begin to look at life as Stoppard’s head tragedian does (that is a world in which every exit is an entrance somewhere else), we begin to see how this Hamlet fan-fic took shape. Take Gogo and Didi, slap them into some verse poetry, give them tabards and a letter to the English King and wha-bam; there’s Stoppard’s piece. END_OF_DOCUMENT_TOKEN_TO_BE_REPLACED

Theatre@First kicks off their second decade of providing local audiences with superlative live theatre at affordable prices with Rosencrantz and Guildenstern Are Dead at the Davis Square Theatre, April 4-12.

In 2004, a small group decided to put on a show in a church basement in Davis Square.  That show was Rosencrantz and Guildenstern Are Dead and that group has become Theatre@First, Somerville’s own community theatre.  Now founding Artistic Director Elizabeth Hunter returns to the beginning with a new production of Rosencrantz and Guildenstern Are Dead.

Tom Stoppard’s Tony Award-winning script focuses on two minor characters from Shakespeare’s Hamlet, imagining their confusion at being caught up in the tragic plot. Full of some of the greatest wordplay in English drama, Rosencrantz and Guildenstern Are Dead examines the meaning of death and the questions of life from an absurdist perspective that leaves audiences laughing at their own folly and gasping at the truths revealed.

For tickets and more information about Rosencrantz and Guildenstern Are Dead and Theatre@First, visit www.theatreatfirst.org.