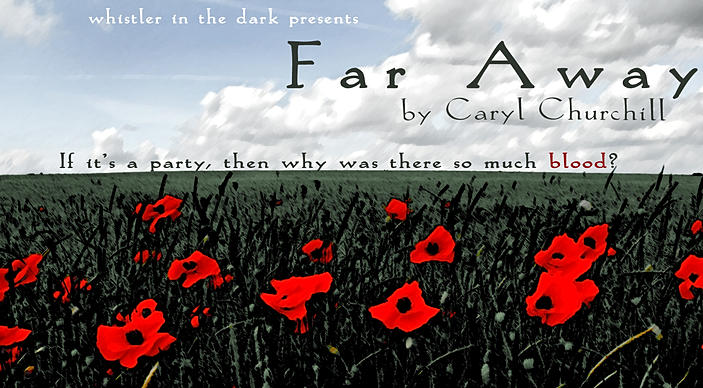 One of the most terrifying things about dictatorships, dystopias, and police states are how they turn what is savage and ridiculous into what is mundane and even acceptable.  Blood doesn’t flow on stage at any point during Whistler in the Dark’s production of Far Away.  No one pulls out a gun or stabs another character to prove a point.  With the power of playwright Caryl Churchill’s words and Meg Taintor’s direction, they don’t need to. Fear  lay heavily over the show already; we don’t need any clearer sign things are uncertain and wrong. END_OF_DOCUMENT_TOKEN_TO_BE_REPLACED

(Charlestown) A system has been built around giving to the poor and helping the needy.  Whistler in the Dark’s The After-Dinner Joke is a bleak comedy lampooning a culture that’s been created around charity: those who give to it, those who decide where the money goes, and those still in need when the giving is done.  It’s a show full of pratfalls and particularly British moments of social observation.  The titular joke, however, is overshadowed by grim realizations about human nature. END_OF_DOCUMENT_TOKEN_TO_BE_REPLACED