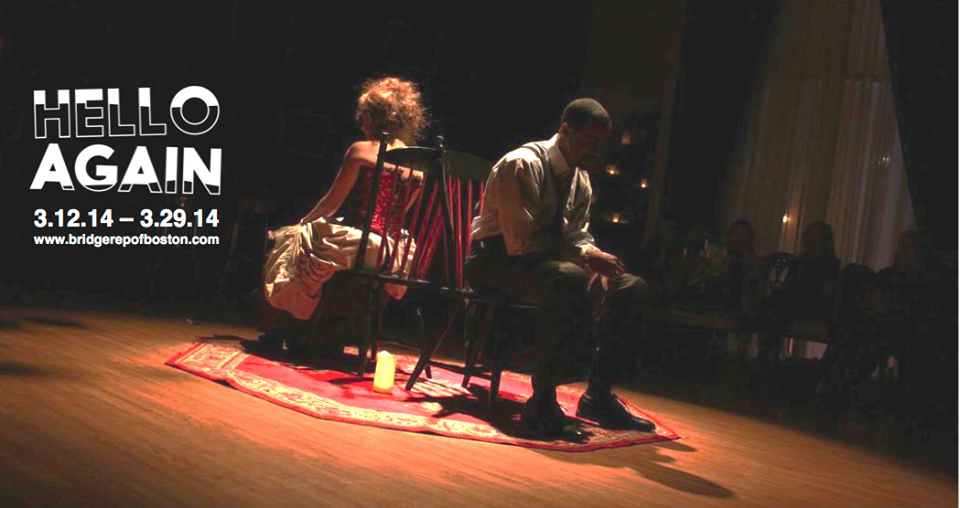 TRIGGER WARNING: This musical has a lot of sex in it. So much of the sex. Fortunately, it’s all consensual.

(Boston) Not all sex is procreative. Sex should be a really good time for everyone involved*. A lot of it isn’t**. If you fundamentally disagree then stop reading now…

Hello Again presented by Bridge Repertory Theatre is an immersive musical that places the audience in the center of the action. And by “action,” I mean riding the skin-train to orgasm town. That being said, the musical is not actually about sex. It is about what leads to sex, why we do it and with whom we choose to do it. It is art focused on a very specific, necessary act.

This musical is based on the play La Ronde by Arthur Schnitzler (a contemporary of Spring Awakening by Wedekind). It explores class and morality through the sexual congress of different characters. LaChiusa borrowed from the play’s plot and added a timeline that bounces between famous 20th century events. LaChiusa’s score is a blend of contemporary classical music and musical theater. It is edgy and occasionally reminiscent of Jason Robert Brown. It could be a classic hit if it weren’t for the controversial subject matter.

The sex depicted in this production is not sweet, romantic or slow. Quite the opposite. This could have been a gruesome production in which the carnal acts held more shock than content value but it isn’t. Director Michael Bello’s staging is tasteful while still graphic. Sex is used metaphorically; the focus character of each vignette isn’t fucking just to fuck. They are fucking for the same reason one sticks their head in the fridge 7 times at 6:35pm on a Friday night. Bello makes it abundantly clear that the characters are seeking something through sex. What that is differs for each character.

While the audience gets no foreplay before jumping headlong into Whoopee Town, the actors are more than prepared for the literal and hypothetical ride. Unfortunately, the cast is not mic-ed. This makes some of LaChiusa’s middle-range vocal lines difficult to hear over the band but the expressive staging gets their points across. To compensate, the cast is explicit with their acting. Even if we can’t hear all of the lyrics, the cast shows us what their intent is. They are vulnerable yet fearsome.

Do NOT bring your children to this one. Do not bring your prude-ish friends and/or family. Although not cut from the same cloth as Oh Calcutta!, this is a musical that depicts why and with whom we make the beast with two backs (think The Rocky Horror Show without the delicious camp). Although not directly about sex, it sure has a whole lot of it. What doesn’t it have? The use of contraceptives/protection. Wrap it up, my friends: no glove, no love.

*If it isn’t you are doing it WRONG.
**Still doing it wrong. Stop being lazy. Communicate with your partner.