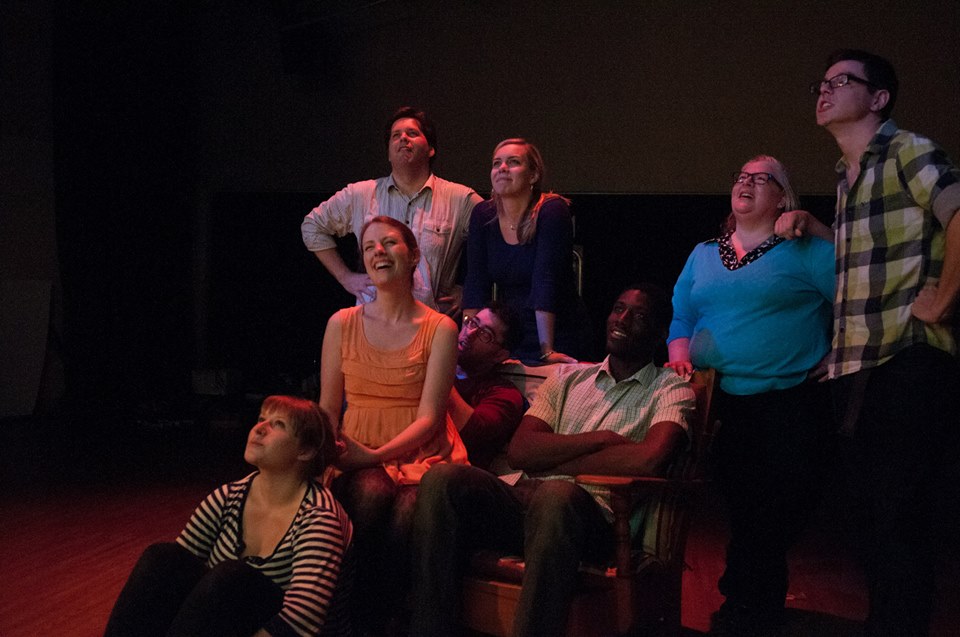 Review by Kitty Drexel
Review is based on the Sept. 28, 2pm performance.

(Boston) Louis C.K. recently went on record saying that he thinks children shouldn’t have cell phones. (Some “news sources” went on record saying Louis C.K. hates cell phones. This is not true. If one watches the clip, this is obvious.) Children need to experience the horrors and joys of life as they occur. Experiencing this allows children to (hopefully) grow into reasonable, seasoned adults capable of handling the emotions of others and themselves. Perpetually having their eyes on a screen or ear up to a receiver will not. Yet, electronics also have their obvious rewards. The laugh-riot that was/is How May I Connect You? (Or, Scenes in the Key of D:\) examined both sides of the tech coin.

When not dancing with faxes, the ensemble toyed with nostalgia while tackling the potential dangers of future technology. What the audience saw was a mix of wry hilarity and somber truths. For example: car phones used to be a big deal: You could travel! And talk to a person in their home! Or in their CAR! The show goes on to ask, will we enjoy the device that replaces the mobile phone? They answered these questions and more via sketch and song. Their conclusions were a mixed bag of “yes” and “no.”

The collaboratively written show puts an emphasis on community into their productions. By exploring technology past and present, they are looking at what makes and will make society tick. In one segment the cast enacts a “Viral Video Challenge” that facilitates audience interaction with the cast. It cleverly replicated a live version of YouTube commenting.

The bigger question asked by HMICY? involved the community at large: If technological advances are supposed to help connect communities, people to people, then why are they so commonly used to avoid human interaction? The cast responds, that society begins and ends with actual social interaction, actual human contact. Everything else is fluff.